Bolstered by roughly 245 sunny days per year and a stringent voter-approved renewable energy standard, Colorado’s solar industry has grown 20-fold in the last half decade. And a coalition of 280 businesses and organizations and  11,000 individuals are now petitioning Governor John Hickenlooper to keep the momentum going, asking him to help push their “3,000 solar megawatts by 2030” goal.

Solar currently accounts for just under 300 megawatts, or 1 percent, of Colorado’s energy pie.

“The Governor is the point really,” said Margaret McCall of Environment Colorado, who helped with the Million Solar Roofs campaign. “He needs to set the goal and he needs to throw his weight behind the necessary policies to get us there.

“The first thing to do is to protect net metering,” she said.

Net metering controls how utility companies credit ratepayers who have invested in solar installations at their homes. The petition arrived at the capitol last week amid an ongoing rift between Xcel Energy and the state’s solar industry over net metering. It also comes amid a shakeup in the Colorado Public Utilities Commission (CPUC), which will decide the net metering issue, and to which Hickenlooper is expected to appoint a new member as early as next week.

Ratepayers with solar currently receive credits to their monthly bill. They also trade use of energy lines and meters for the megawatts their homes push back into the grid on super sunny days.

In its 2014 renewable energy plan, Xcel suggested to the CPUC that exempting solar ratepayers from the “fixed costs” associated with building and maintaining the infrastructure that brings energy to homes is simply unfair.

“As prices have gotten to the point where utility-scale solar is actually a competitive energy source, we’ve had to go back and reevaluate our approach,” said Gabriel Romero, a spokesperson for Xcel. “So we ask, what’s going on with rooftop solar and how do we get it to the point where we can call it cost effective?”

Romero added that although many homes with rooftop solar kick energy back to the grid, they also occasionally make use of the grid to maintain an even flow of energy during evenings and cloudy days.

“Essentially they are using all the same wires that any other customers are, but at no cost,” he said. “That very specific thing is what Xcel is looking at as a subsidy. The solar industry disagrees, and that’s where the CPUC comes in.”

In February, the CPUC will decide if asking solar-equipped ratepayers to foot the bill for the lines they sometimes use is reasonable. Yesterday the CPUC received official rebuttal answers to Xcel’s proposed changes from members of the solar industry and community.

“Fundamentally Xcel is the largest electric provider in the state,” said McCall. “ So, if Xcel says, ‘Let’s roll back net metering,’ it would be a huge blow to the solar market … They’re hoping that the CPUC is just going to rubber stamp [the proposal].”

Terry Bote, a commissioner on the CPUC, said they have no intention of approving Xcel’s new renewable-energy plan  — which includes the debated changes to net metering — without thorough review.

Bote explained that the commission has scheduled a week-long hearing on the issue for the first week of February.

“All parties will have an opportunity to present their positions and evidence,” Bote said. “Then the commission will determine what they believe to be best public policy.”

The debate essentially circles around the value of home-based solar energy. Xcel has pointed to a study indicating that the solar energy generated by homeowners clocks in at around half the value the company currently pays them. Xcel says very little money is saved by producing the energy on-site and not having to transport it too far across the grid.

The solar industry responded by commissioning their own more recent study on the value of net metering, which they say is also more rigorous and comprehensive.

“We believe the total value of net metering contributes between $7 million and $11 million each year to Xcel’s grid,” said Rebecca Cantwell of the Colorado Solar Energy Industries Association. “We totally disagree that net metering is a subsidy. We believe it’s helping the whole state.”

Although many feel the future of small-scale solar development may hinge on net metering, the future of solar overall, particularly in the UV playground we call home, seems fairly assured.

Measured in cost per kilowatt hour, large-scale solar energy is now just a hair more expensive (6 cents v.s. 4-5) than natural gas and coal energy, nonrenewable resources with costs that fluctuate based on the commodity market.

Meanwhile, the solar-industry-backed Million Roofs campaign mapped endorsers and found strong support for the project across the state, in rural and urban communities: 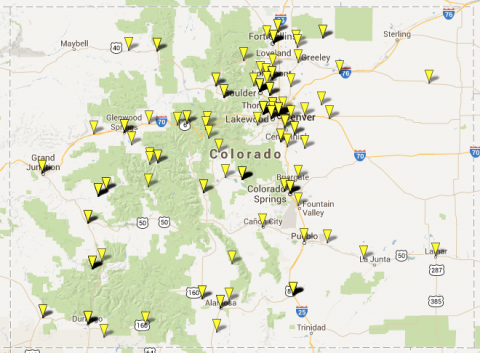 “This happened with wind energy two years ago and it’s happening with solar now,” said Xcel’s Romero of solar’s massive downswing in cost and upswing in popularity. “Forget the fact that it’s renewable. It’s practical.”

A pro-Trump newspaper is targeting Coloradans through the mail. Have you gotten one?

Candidates for CO governor are bankrolling their own races. Chances are, it won’t pay off.